The Hermetic Order of the Golden Dawn 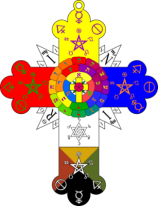 “The three founders , William Robert Woodman, William Wynn Westcott, and Samuel Liddell MacGregor Mathers, were Freemasons and members of Societas Rosicruciana in Anglia . . . Westcott appears to have been the initial driving force . . . The Golden Dawn system was based on hierarchy and initiation like the Masonic Lodges; however women were admitted on an equal basis with men. [ Quoting Wikipedia from 2016–see current article here… ]

Some of the more famous members included:

The Hermetic Order of the Golden Dawn [see above]