1) Contemplation and action are opposed to one another–i.e. contraries in the true sense of the word (Crisis… 33-34).

This is superficially true, since in each person (or people), one tendency appears to predominate at the expense of the other (human beings cannot exert themselves in all realms and all directions at once).  However, this opposition is merely apparent and relative and can be reconciled on a higher level.

2) Contemplation and action are complimentary and tend to balance one another despite the fact that one or the other will predominate in practice (Crisis… 34-35).

This “point of view” is “deeper and truer” than the first–and more satisfying insofar as it resolves the apparent opposition, but it does not address the question as to the right of one or the other to predominate (their respective associations with a particular temperament or race notwithstanding).

Contemplative knowledge serves as the unmoved mover of real action.  Apart from such knowledge, any apparent action is just agitation (Crisis… 38).

We see then (from the standpoint of The Crisis in the Modern World, above) that it is a mistake to associate (real) contemplation with self-indulgent passivity and general inactivity.  Rather, authentic contemplation is the sine qua non of real, meaningful action.  As such, we might do well to utilize one of the conventions from Meditations on the Tarot– a convention of capitalization applied to various concepts in that work –so as to distinguish, in this case, between contemplation & Contemplation (and, for that matter, action & Action) so that we can affirm without ambiguity that there can be no (authentic) Action apart from (authentic) Contemplation.  [See the related discussion of contemplation and action on pages 225 and 226 of Letter 9 on The Hermit.]

While there may be lots of apparent activity apart from contemplation (i.e. “action”, with a small “a”), Rene Guenon demonstrates that such action is really just agitation that results from overlooking the only possible source of any principle or sufficient reason for (real) Action:

Action, being merely a transitory and momentary modification of the being, cannot possibly carry its principle and sufficient reason in itself; if it does not depend on a principle outside its own contingent domain, it is but illusion; and this principle, from which it draws all the reality it is capable of possessing– its existence and its very possibility –can be found only in contemplation, or, if one will, in knowledge, for these two terms are fundamentally synonymous, or at least coincide, since it is impossible in any way to separate knowledge from the process by which it is acquired.  Similarly change, in the widest sense of the word, is unintelligible and contradictory; in other words, it is impossible without a principle from which it proceeds and which, being its principle, cannot be subject to it, and is therefore necessarily unchanging; it was for this reason that, in the ancient world of the West, Aristotle asserted that there must be a ‘unmoved mover’ of all things. It is knowledge that serves as the ‘unmoved mover’ of action; it is clear that action belongs entirely to the world of change and ‘becoming’; knowledge alone gives the possibility of leaving this world and the limitations that are inherent in it, and when it attains to the unchanging– as does principal or metaphysical knowledge, that is to say knowledge in its essence –it becomes itself possessed of immutability, for all true knowledge essentially consists in identification with its object. This is precisely what modern Westerners overlook: they admit nothing higher than rational or discursive knowledge, which is necessarily indirect and imperfect, being what might be described as reflected knowledge; and even this lower type of knowledge they are coming more and more to value only insofar as it can be made to serve immediate practical ends.  Absorbed by action to the point of denying everything that lies beyond it, they do not see that this action itself degenerates, from the absence of any principle, into an agitation as vain as it is sterile (Crisis… 37-38).

In this connection, it might be said that what, according to tradition, characterizes the ultimate phase of a cycle is the realization of all that has been neglected or rejected during the preceding phases; and indeed, this is exactly the case with modern civilization, which lives as it were only by that for which previous civilizations had no use. To confirm this fact, it is enough to observe how the genuine and traditional representatives of such of the more ancient civilizations as have endured in the East up to the present appraise Western sciences and their industrial applications. These lower forms of knowledge, so worthless to anyone possessing knowledge of a different and higher order, had nevertheless to be realized, but this could not occur except at a stage where true intellectuality* had disappeared. Such research, exclusively practical in the narrowest sense of the word, was inevitable, but it could only be carried out in an age at the opposite pole to primordial spirituality, and by men so embedded in material things as to be incapable of conceiving anything beyond them. The more they have sought to exploit matter, the more they have become its slaves, thus dooming themselves to ever increasing agitation without rule or objective, to a dispersion in pure multiplicity leading to final dissolution (Crisis… 19).

The aforementioned “agitation” can be compared to those “actions” originating from “A” impulses, as described and illustrated by Boris Mouravieff in Gnosis, Vol. I (see graphic below).  Authentic Action, on the other hand, originates from “B” influences, which require a more subtle sense of discernment:

The black arrows represent influences created within life by life itself, this is the first variety of influence by which man is surrounded. These are called ‘A’ influences. We will notice that they are distributed almost equally over all the surface of the circle of life. As in the case of all radiant energy in nature, their effect is inversely proportional to the square of the distance; thus man is subject most of all to arrows influencing him from those immediately around him. He is pulled every instant by the way they act at that moment.

The influence of the ‘A’ arrows on exterior man is imperative; driven, he wanders in the circle of his life from birth to death, following a broken line which is sometimes subject to dangerous changes of direction.

The ensemble of ‘A’ influences forms the Law of Chance or Law of Accident. Man is subject to its rule, yet if we examine the figure more closely we will perceive that each black arrow is counterbalanced, neutralized in some other part by another arrow equal in force and diametrically opposed, so that if we had left them to effectively neutralize each other the resultant force would have been equal to zero. This means that in their ensemble the ‘A’ influences are illusory in their nature, although the effect of each one of them is real, so that exterior man takes them for reality. The white circle represents the esoteric Centre, located outside the general laws of life.

The white arrows represent influences called ‘B’. These influences are thrown into the turmoil of life and originate from the esoteric Centre, treated outside life, these arrows are all oriented in the same direction. In their ensemble they form a sort of magnetic field.

Since ‘A’ influences neutralize each other, ‘B’ influences actually constitute the only reality.

The small circle with the shaded lines represents man, who in this figure is taken in isolation. The oblique shaded lines signify that the nature of exterior man is not homogeneous: it is mixed.

If man spends his life without distinguishing between ‘A’ and ‘B’ influences, he will end it as he started, one could say mechanically, driven by the Law of Accident. However, according to the nature and the intensity of the resultant forces to which he is subjected, it can happen to him to make a brilliant career, in the meaning the world gives to this expression. Yet he will come to the end of his days without having either learned or understood anything of Reality. And earth returns to Earth.

In life, every being is subjected to a sort of competitive test. If he discerns the existence of the ‘B’ influences; if he acquires a taste for gathering and absorbing them; if he continually aspires to assimilate them better; his mixed inner nature will slowly undergo a certain kind of evolution. 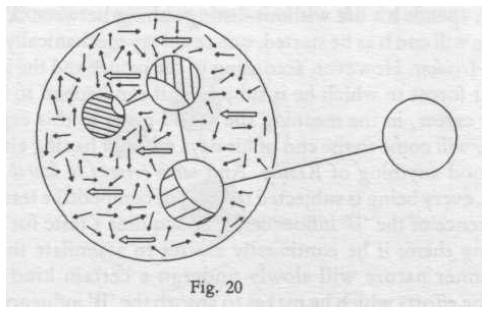