“TeenyTinyTarot” © is proud to introduce this new set of Waite Smith style tarot trumps based on the original Waite Smith design, first published in 1910 (or 1909, depending on who you talk to).  As you may have already guessed, RWS— in the title of this article –refers, respectively, to the original publisher, “William Rider & Son” (London); to the author, designer, and project originator, “Arthur Edward Waite“; and to the artist and collaborator, “Pamela Coleman Smith“. 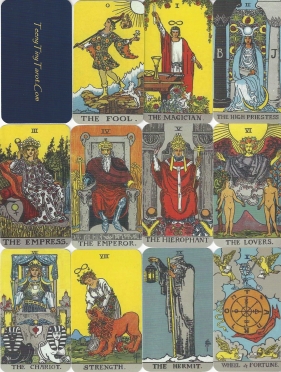 Our goal is to share Meditations on the Tarot and the path of Christian Hermeticism more widely by offering this more colorful, more popular set of tarot trumps in addition to the more traditional “Marseille style” trumps that we have been offering since 2014.

Despite the significant differences between the two sets of trumps, the Waite-Smith design retains much of the same imagery as the Tarot of Marseille while at the same time (it seems) appealing to a wider audience. In any event– since its initial publication here in 1971 by U.S. Games Systems, Inc. –it appears to have provided the primary point of entry into the Tarot tradition for the majority of people in the United State and it continues to have a broad appeal. Indeed, if its popularity has waned over the last 2 or 3 decades, that is only because of the competition from hundreds of new decks which it has served to inspire.