Posted on September 7, 2019 by TeenyTinyTarot

Some highlights, separated by ellipses [. . .], are posted  below.  Follow this link to read the complete summary.  Use CTRL-F to search for a desired word or phrase 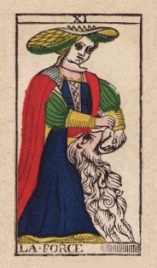 (This thing is the strongest of all powers,
the force of all forces,
for it overcometh every subtle thing
and doth penetrate every solid substance.)
……………………………..(tabula Smaragdina, 9)

In Letter 10, our anonymous author discusses the transformation of fallen animality into holy animality:

In the preceding Letter the transformation of fallen animality into holy animality was discussed, where the latter is spontaneous obedience to God, without the hindrance of reflection, doubt or motives of interest.  Such obedience is basically an instinct (269).

In this letter, he continues to elaborate on this distinction, outlining two tableaus which summarize the kind of force that is active in the respective natures which are exemplified in these two types of animality–forces illustrated by the two types of water (or “seas”) and the two feminine figures described in the Apocalypse of St. John.

At this point, he quotes Revelation 12: 1-4, describing in some detail the two feminine figures representing non-fallen and fallen nature, respectively:  1) Israel/The Mother of God, and 2) The Whore of Babylon…

Thus, the Word became flesh and dwelt among us…  The Virgin-Sophia was present in Mary as the soul of non-fallen Nature gave birth to the divine Word (274).  “Free Nature” has accomplished her task and, as the principle of Force, continues to cooperate in the realization of supernatural acts of the Holy Spirit which are a Divine magic that transforms, transmutes, and heals the effects of sin in fallen nature.

Thus the fallen animality of the lion yields to the Holy Animality of The Lion.

“It is the magic of virgin Nature which awakens the virgin nature in the lion, and it is this Force that the eleventh Arcanum is called to reveal. There are two principles which one has to understand and distinguish when one wants to go deeply into the Arcanum of Force. The one is the principle of the serpent, and the other is that of the Virgin. The former is opposition from which there proceeds friction which produces energy. The other is concordance from which comes fusion which engenders force” (275).

Above, we saw two types of water, two “natures”, and two feminine figures.  Likewise, we see two types of life, one of which has been corrupted by the domain of the serpent through which it flows.

After a brief discussion of the way in which truth flows from con-versation (a flowing together rather than the clash of opinions), our anonymous author distinguishes between the force of life and the force of electricity:

“electricity is due to the antagonism of opposites, whilst life is the fusion of polarities” (277).

He further distinguishes between two types of life, the first– Zoe –flows down from above, vertically, the second– bios –flows horizontally, from generation to generation:

But because bios flows through the domain of the serpent, it has become mingled with electrical energy in a way that leads to corruption and decay (cf. “the tree of the knowledge of good and evil–the fruit of the polarity of opposites” 278).  It is for this reason that we find nature divided according to the relative dominance and predominance of Zoe, bios, and electricity:

…the reality of fertile, productive virginity is said to be immanent in Mary-Sophia who represents (incarnates/manifests) the principle of virginity:

In the pages which follow, it is emphasized that the blessed Virgin is “a concrete and living individuality” and that every sincere, authentic Hermeticist (whose spiritual aspiration is intense and pure) will eventually meet her.  For it is only by being wrapped in her mantle that we can pass safely through the zone of illusion designated by the prophets and the Apocalypse as that great prostitute, Babylon (281).

Earlier, we saw that “the principle  of the Virgin . . . is concordance from which comes fusion which engenders force” (275).  This idea is further elaborated upon by distinguishing political union— the alliance of individual wills with a view to achieving a common aim –from authentic unity:

“With respect to qualitative force, it would be appropriate to say that “unity is force”, because one is strong only in so far as there is unity of spirit, soul and body, i.e. in so far as there is virginity. It is inner conflict that renders us weak: the fact that we serve two or even three masters at the same time” (282; cf. 279, “the unity three worlds…”).

It is this unity that, according to the Emerald Tablet, overcometh every subtle thing and doeth penetrate every solid substance.

It overcometh every subtle thing…

Far from dominating in a coercive manner, Force “turns enemies into friends” (282).  For it is through this power that Saul of Tarsus became the Apostle Paul and that, eventually, the Devil himself will be overcome when his voice . . . will be heard with the chorus of celestial hierarchies praising God…  Until that time, life on earth will continue to be characterized by temptation (mechanics/opposition/electricity), on the one hand, and inspiration (sacred magic/cooperation/life), on the other–which, together, constitute a kind of two-way street which our anonymous author describes as an exchange of influence.

In the pages which follow, a tableaux of degenerative and regenerative influences is suggested– temptations and inspirations –which operate on three different levels.

It doeth penetrate every solid substance…

…just as our anonymous author speaks of the “triple form” of electricity, even so solidity is said to be experienced on three different levels–each of which is penetrable by Force or virginity:

Now, there is physical, psychic and mental “solidity”.  All three forms of solidity have in common that they are experienced as obstacles to our movement.  They are experienced as impenetrable.  Nevertheless, the Emerald Table affirms that “every solid substance”, i.e. each physical, psychic and mental obstacle, is certainly penetrable for Force or virginity (287).

He goes on to describe this penetration in terms of an emollient action which is, once again, operative on all three levels . . .

Thus, the concept of Force is said to be an intermediary between pure consciousness and manifestation.  Force, in the generic sense, has two aspects–that of the serpent (electricity) and that of the Virgin (life).  It is through and by virtue of the latter– the Force of our Arcanum which is  the principle of springtime and spiritual flourishing –that Hermeticists are called to realize a springtime in the western world which has, otherwise, turned away from the Virgin (e.g. by pursuing, instead, the reformation, rationalism, the French revolution, materialism, and communism).  [290-291]

In contrast to many contemporary occultists (who have sided with the dethroners of the Virgin, e.g. the exponents of scientism and other iconoclasts), the Hermeticist is an iconophile for whom symbols, far from being obstacles to the truth, are revelatory.  Whereas the iconoclast is a murderer of tradition, the Hermeticist honors his father and his mother which is the spirit and soul of tradition (292).  Thus he concludes that:

Hermeticism lives and survives from century to century thanks to its essential faithfulness to the divine commandments “thou shalt not kill” and “honour thy father and thy mother” (293).

Such honor is extended not merely to representatives of the Judeo-Christian tradition, but also to “Greek philosophers, Cabbalists, and many others besides” (294).  And we can do this without engaging in syncretism or adultery, staying true to our tradition and to our Lady who vivifies it.  For however much we may benefit from the teachings of other traditions, we must not forget that the spiritual tradition of Israel– “the spiritual tradition par excellence” — is of universal significance…

He goes on to reformulate Moses’ ten commandments in contemporary terms, concluding that:

the ten commandments —when comprehended and practised — signify harmony with non-fallen Nature, with the Virgin and the principle of virginity, i.e. with the Force of the eleventh Arcanum of the Tarot.

(This thing is the strongest of all powers,
the force of all forces,
for it overcometh every subtle thing
and doth penetrate every solid substance.)
……………………………..(tabula Smaragdina, 9)

Editor’s Note:  While reading a summary of this letter is obviously no substitute for reading the original, this should offer a good review for those already familiar it and may help to focus the new student’s attention on the core issue(s) being discussed.  Don’t neglect the original, in any event.  The spiritual essence of these letters cannot be captured in a summary, however complete.  Quality time with our anonymous author is essential… 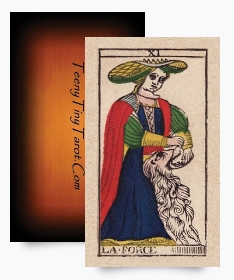