7. Outline of Seminal Figures in the History of the Occult Tarot 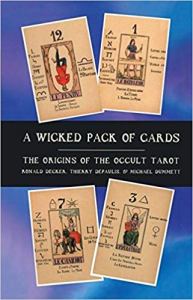 Much of the material in this section is derived from what is in many, many respects an excellent historical reference work: A Wicked Pack of Cards: The Origins of the Occult Tarot (Duckworth 1996, Decker, Depaulis, and Dummett) — and the sequel, A History of Occult Tarot 1870 – 1970 (Duckworth 2002, Decker and Dummett).  The authors have done the Tarot community an invaluable service by nailing down many historical details that would otherwise continue to be obscured by our fascination with legends and our incorrigible tendency to hero-worship and hagiography. That being said, however, their work also creates a bit of a hazard by virtue of their occasionally unbridled cynicism, together the apparently naturalistic and reductive impulses which seem to be operative throughout the book.

Reading through their account of the lives of these seminal figures, one would think, at times, that they were writing about people who were little more than half-witted, half-mad charlatans. While the brilliance of some of these figures is at least occasionally acknowledged, they are, on balance, credited with creating (if not an outright hoax or scam) a body of work that is only a relatively unconscious deception fabricated by men who tend to be quite beside themselves in their occult enthusiasm. The impression I am left with is that the authors tend to look down their noses at these figures and, for the most part, don’t especially like what they see.

[NOTE:  To be fair, it appears that the academic philosopher (the late) Michael Dummett may be primarily responsible this aspect of their work.  Subsequent to its publication, Ronald Decker published another book, The Esoteric Tarot: Ancient Sources Rediscovered in Hermeticism and Cabalah (Quest Books, 2013), which appears to approach Tarot history quite differently.  Update: To be totally fair to Michael Dummett, however, one should also check out his conversion story (update added 1/2/2019)]

In any event, while I can fully acknowledge that the imaginative speculation and rhetorical flourishes employed by these seminal figures are sometimes out of bounds— and it is undeniable that they do, indeed, succumb to wishful thinking from time to time —I think that we do both them and ourselves a disservice if we too easily disparage or too quickly discount the nature of their life’s work.

As such, let us remember (as we take a peak into their life and work) that most of these seminal figures were vibrant, creative human beings of no small genius who, like most of us, had both high ideals and feet of clay. Whatever their short-comings, we are, in a sense, participating in their life’s work as we continue to interact with the Tarot today. Without them, the Tarot as we know it would not exist.

With the exception of Le compte de Mellot and Papus, we will look at these seminal figures based on the century in which they died, realizing, however, that in some cases they did significant work in the previous century:

Next Up: –> 8.  Two Esoteric Schools Worthy of Special Mention