“She seizes him and kisses him,
And with impudent face she says to him:
I had to offer sacrifices,
And today I have paid my vows.
So now I have come out to meet you.
To seek you eagerly, and I have found you.”
(Proverbs vii. 13-15)

“Set me as a seal upon your heart.
As a ring upon your arm;
For love is strong as death. . .
Its flashes are flashes of fire,
A flame of the Eternal.”
(Song of Songs viii, 6-7)

In the wake of these opening epigraphs, our Anonymous Author continues with this description:

Here the whole composition of the sixth Card is translated from the visual language of the Tarot into that of the poetry of Solomon. For there a dark-haired woman with an impudent face clad in a red robe seizes the shoulder of the young man whilst another, with fair hair and dressed in a blue mantle, makes appeal to his heart with a chaste gesture of her left hand. At the same time, above, a winged infant archer, standing out against a white sphere emitting red, yellow and blue flames, is about to let fly an arrow directed at the other shoulder of the young man. Does one not hear, in contemplating the sixth Card of the Tarot, a voice which says:  ‘I have found you’, and another which says:  ‘Those who seek me find me’ ? Does one not recognise the voice of sensuality and the voice of the heart, and likewise the flashes of fire from above of which king Solomon speaks?” [123-124]

The central them of this letter is chastity (just as the central theme of Letter V was poverty and Letter IV was obedience).   Since chastity is the fruit of obedience and poverty, the practical teaching of this arcanum concerns those three vows (obedience, poverty, and chastity) together with three corresponding temptations (power, richness, and debauchery).

The three vows are memories of paradise:  Man united with God (obedience); possessing everything at once (poverty); with his companion being at once his wife, sister, friend, and mother (chastity).

This love is the prototype of “love of neighbor”.   It is only our egocentricity that makes it seem that others are less real and of less significance than ourselves (though our thought tells us this is an illusion).

Love awakens us to the reality of others (whereas the wisdom of India [we are told] offers an abstract “indifference” to self and other which reduces both to shadows). [124-126]

Christian love, on the other hand is intense and substantial.  Rooted in one individual being, it begins to ray out in all directions.  Who is our neighbor?  In the Hermetic sense, it is our “twin” or “sister-soul”  at/since the beginning.  All forms of love are derived from this primordial love (as all colors are derived from “white light”). [126-127]

After an aside on the reductionist accounts of Freud, Marx, and Adler (sex, economics, and power, respectively) — and a brief tribute to C.G. Jung for “discover[ing] the divine breath at the core of the human being” — we learn that there exists in each of an “Edenic” layer which is, for us, the locus of paradise and the fall:

“Paradise, being the realm of beginning and principles, is at the same time that of the beginning of the Fall or the principle of temptation, i.e. the principle of transition from obedience to disobedience, from poverty to greed, and from chastity to unchastity” (132).

Finding that layer within ourselves, we know that the account in Genesis is true [on the inside].  Initiation involves a knowledge of that which IS at the beginning–i.e. the conscious experience (in ‘enstasy’ of the initial microcosmic state (which is referred to as  “Hermetic” initiation)  and the conscious experience (in ‘ecstasy’) of the initial macrocosmic state (which is referred to as  “Pythagorean” initiation).  The first is a realization of the “depths” of the human being; the second a realization of the heights beyond oneself.  Those who experience the former are disciples of the day; those who experience the latter are disciples of the night.  The gospel of John reflects an experience of both. [129-130]

“For the reality of paradise is the unity of the macrocosmic solar sphere and the microcosmic solar layer— the sphere of the cosmic heart and the solar foundation of the human heart. Christian initiation is the conscious experience of the heart of the world and the solar nature of man.  God-Man is the Initiator, and there is no other. What we understand by the term “Initiator” is what the early Christians understood by the word ‘Kyrios’ (‘Dominus’ or “Lord”)” (131).

The temptation in paradise was three-fold — corresponding to the three-vows which ground the three-fold unity:  [132]

1) Eve *listens* to the serpent (instead of simply and exclusively to the Word of God).
2) Eve *saw* that the tree was good for food/delightful (reflecting a horizontal orientation–in contrast to her erstewhile vertical orientation which looked only to God)
3) Eve *took* the fruit and shared it with Adam (whereas before she merely received the gift of God).

Listening to the serpent gave rise to doubt which is described as two fold inspiration.  Obedience is exclusive devotion to the sole voice from above.  The very act of listening and comparing the two voices was an act of spiritual disobedience and the beginning of the fall.  By listening to the voice of the serpent, Eve looked at the tree in a new way.  No longer honoring the Word of God, above all, she became “ready to have experience” and to “make experiments”:

“…to seek experiences or to make experiments based on doubt is the very essence of carnal, psychic and spiritual unchastity.  For this reason one does not carry out experiments in Christian esotericism or Hermeticism.  One would never take recourse to experiments with a view to dispelling doubt.  One has experiences, of course, but one does not make experiments. Because it would be contrary to the holy vow of chastity to put forward a hand and to take from the tree of knowledge. The spiritual world does not in any way suffer experimenters.  One seeks, one asks, one knocks at its door.  But one does not open it by force.  One waits for it to be opened” (133).

God is not an object and cannot be grasp, but as the source of illumination, he can reveal himself.  Just as the light of the sun renders physical things visible to our earthly eyes, so the light of grace opens our spiritual eyes to spiritual reality. [134]

Kyrie Eleison (Lord have mercy) is the proper comportment of the seeker–and the magical quaternity, “to dare, to will, to be silent, and to know”, is transformed by the Master into:

“It is a matter of daring to ask, of the will to seek, of being silent in order to knock and of knowing when it is opened to you.  For knowledge does not happen automatically; it is what is revealed when the door is opened” (135).

Contrary to Pelagianism (and to the Protestantism of Luther), this formula reflects the synthesis of effort and grace — nature vulnerata, no delta  — “nature is wounded, not destroyed”, therefore, “there is also an element in human nature which is therefore capable of effort and work which counts” (135).

“This is the complete formula for initiation:

That you, being rooted and grounded in love, may have power to comprehend with all the saints what is the breadth and length and height and depth, and to know the love of Christ which surpasses knowledge, that you may be filled with all the fullness of God. (Ephesians iii, 18-19)

Through the symbolism of mysticism, gnosis, and magic, Christian Hermeticism expresses BOTH the depth and the height (enstasy and ecstacy), AND the breadth (all that is universal) and the length (all that is traditional).  [135-136]

The work of redemption must repeat the threefold temptation and reverse the effects thereof–this time in the person the Son of Man who is tempted in the wilderness.  And, this time– instead of the serpent –the tempter is “the prince of this world” who, if incarnated, would be “the superman” (or antichrist) promised by the serpent. [137-138]

Antichrist is an ‘egregore’ — the ideal of biological and historical evolution without grace:

“The antichrist is the ultimate product of this evolution without grace and not an entity created by God ― the act of divine creation being always, without exception, an act of grace. He is therefore an ‘egregore’, an artificial being who owes his existence to collective generation from below.
[…]
. . . egregores, as powerful as they may be, have only an ephemeral existence, whose duration depends entirely on galvanising nourishment on the part of their creators.  However, it is the souls and spirits from above― forming, inspiring and directing communities of human beings ―who nourish and vivify human souls. . . . Egregores are therefore nourished by men, whilst the latter are nourished by souls and spirits from above” (138-139).

Every man, every nation, every religion, etc., have their “phantom” (or “double”).   Antichrist is the phantom of the whole of mankind. [139]

Antichrist appeared to Nietzsche (as expressed in the ideas of the “eternal return”– on the horizontal plane –of a reality “beyond good and evil”, ruled by “the will to power”, in a world where “God is dead”); and also to Marx (who envisioned the working class transformed into Masters by securing the technical knowledge that allows them to transform stone into bread). [140]

The ideal of evolution gives way to grace when the Antichrist appears to the Son of Man in the gospel and he chooses obedience over the will to power; chastity over the groping trial of evolution; and poverty over the transformation of stones into bread. [141-143]

Man shall not live by bread alone…  Not only can Spirit nourish the body as well as the soul, but it is the vow of poverty that will gradually abolish the struggle for existence.  Indeed, Christianity (among many prophetic religions) is the good news that there is another way besides the groping trial of the serpent/evolution:

“The principle of spiritual fornication is therefore the preference of the subconscious to the conscious and superconscious. of instinct to the Law, and of the world of the serpent to the world of the WORD” (143).

Obedience is faithfulness to the living God.  Revolt or disobedience is the decision in favor of Antichrist.  The sixth arcanum throws into bold relief this choice by evoking the three vows and the three temptations in the context of chastity which presupposes poverty and obedience, as well.

And what is the consequence of keeping these vows and resisting these temptations?

“Then the devil left him. and behold, Angels came and ministered to him. (Matthew iv, 11)

This sets the stage for the discussion of the seventh arcanum… 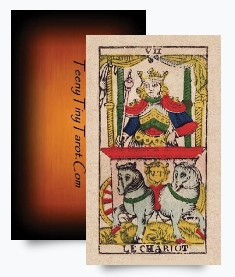