“The wind blows where it wills, and you hear the sound of it, but you do not know whence it comes or whither it goes; so it is with every one who is born of the Spirit” (John iii, 8.).

“Into this happy night
In secret, seen of none.
Nor saw I aught,
Without other light or guide.
Save that which in my heart did burn”
(St. John of the Cross).

Regarding the Magician, our Anonymous Author writes: 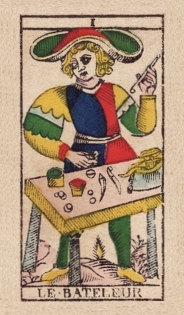 “A young man, wearing a large hat in the form of a lemniscate, standing behind a small table on which are arranged: a yellow-painted vase; three small yellow discs; another four red discs, in two piles, each divided down the middle by a line; a red beaker with two dice; a knife withdrawn from its sheath; and lastly a yellow bag for carrying these various objects. The young man —who is the Magician — holds a rod in his right hand (from the standpoint of the observer) and a ball or yellow object in his left hand. He holds these two objects with perfect ease,  without clasping them or showing any other sign of tension, encumbrance, haste or effort. What he does with his hands is with perfect spontaneity— it is easy play and not work. He himself does not follow the movement of his hands; his gaze is elsewhere” (Meditations on the Tarot 7).

In our preliminary remarks about The Fool, we indicated that The Magician was, in fact, the only possible starting point for these Meditations–-for just as our Anonymous Author rejects the possibility of ending his book with a consideration of The Fool (because, he says, it offers no summary of the preceding meditations), likewise he is strongly predisposed to begin with the Magician because, as he observes in passing, it is the principle underlying all the other twenty-one Major Arcana.  And what is that principle?  It is a certain ease of being, involving a very profound element of meditation, which is succinctly expressed in the following formula:

Learn at first concentration without effort; transform work into
play; make every yoke that you have accepted easy and every
burden that you carry light!

Among other things, this principle suggests a kind of spiritual attunement or atOnement on the part of The Magician– i.e. his connection with the Divine –that results, quite literally, in grace-full creativity.  Let us examine this formulation in more detail and see how our Anonymous Author understands all this:

“The first Arcanum —the principle underlying all the other twenty-one Major Arcana of the Tarot — is that of the rapport of personal effort and of spiritual reality.
[…]
“…the first and fundamental principle of esotericism (i.e. of the way of experience of the reality of the spirit) can be rendered by the formula:

“Learn at first concentration without effort; transform work into play; make every yoke that you have accepted easy and every burden that you carry light!

“This counsel, or command, or even warning, however you wish to take it, is most serious; this is attested by its original source, namely the words of the Master Himself:

While an adequate explication of this must await our more detailed study guides, this text (together with the two paragraphs which follow it on the same page) is key:

More important to our purposes, here– in this preliminary introduction –are the practical ramifications of this teaching.  Because there is an underlying unity to reality, we need not fret over the good that we would do (cf. Romans 7).  Rather, we need to become attuned to (and atOne with) the One with whom we have to do–the One in whom we live and move and have our being (cf. Act 17:28).  As such, we need to get out of our heads–or, as Alan Watts used to say, we’ve got to go out of our minds.  Our Anonymous Author illustrates this beautifully using a tightrope walker as an example:

The intelligence of his rhythmic system replaces that of his brain during his acrobatic exercises.  It is a miracle analogous to tht of St. Dionysius who carried his decapitated head two miles to his final resting place (9).

The reference, here, to St. Dionysius pertains to a story of him in which we are told that, after he was beheaded, he picked up his head and carried it two miles to the place where he was finally buried.  In both cases–that of the saint in the story and that of the tightrope walker,

“it is a matter of transposing the centre of directing consciousness from the head to the chest —from the cerebral system to the rhythmic system.  Concentration without effort is the transposition of the directing centre of the brain to the rhythmic system —from the domain of the mind and imagination to that of morality and the will.”
[…]
“The Magician therefore represents the state of concentration without effort, i.e. the state of consciousness where the centre directing the will has “descended” (in reality it is elevated) from the brain to the rhythmic system, where the “oscillations of the mental substance” are reduced to silence and to rest, no longer hindering concentration.”

He goes on to describe the deep, deep silence which is accessible to us when we learn

“Concentration without effort — that is to say where there is nothing to suppress and where contemplation becomes as natural as breathing and the beating of the heart —is the state of consciousness (i.e. thought, imagination, feeling and will) of perfect calm, accompanied by the complete relaxation of the nerves and the muscles of the body. It is the profound silence of desires, of preoccupations, of the imagination, of the memory and of discursive thought” (10).

But as odd as it may sound to those who have no experience of this, as one moves deeper into this silence, the result is not passivity, but the most magically beautiful action:

“The Magician the is the arcanum of intellectual geniality and cordiality, the arcanum of true spontaneity. Concentration without effort and the perception of correspondences in accordance with the law of analogy are the principal implications of this arcanum of spiritual fecundity.  It is the arcanum of the pure act of intelligence.  But the pure act . . . in itself cannot be grasped; it is only its reflection which tenders it perceptible, comparable and understandable or, in other words, it is by virtue of the reflection that we become conscious of it. . . . The second Arcanum, the High Priestess, is that of the reflection of the pure act of the first Arcanum up to the point where it becomes “book”.  It shows us how Fire and Wind become Science and Book.  Or, in other words, how “Wisdom builds her house” (29-30).