“The master-key to the Hebrew wisdom is the “name” translated “Lord” [*] in the Authorized Version of the Bible, and “Jehovah” in the revised versions. It is not really a name at all, but rather a verbal, numerical and geometrical formula. In Roman letters corresponding to Hebrew it is spelled IHVH.

“Never has Ageless Wisdom attempted to define this One Reality. Its inner nature defies analysis, cannot be put within the limits of any formal statement, because the One Reality is infinite. Yet, in every age the report of the wise has been that in the One Something inheres the power to know. We say, therefore, that IHVH is a verbal symbol for the Conscious Energy that brings all things and creatures into existence.”

~ Paul Foster Case, “A Key to the Wisdom of the Ages”

The image above indicates a correlation which is commonly drawn between the four letters of the Divine name, the four Kabbalistic worlds, the four elements, and the four Tarot suits. Note the alternative correlation (between the creative & formative worlds and the elements of air and water, respectively) suggested by left-hand image of the Tree of Life, below…

The images above are just two of many, many such images floating around the Internet reflecting a variety of interpretations. The text and image, below, are from the B.O.T.A. (“Builders of the Adytum”) web site: 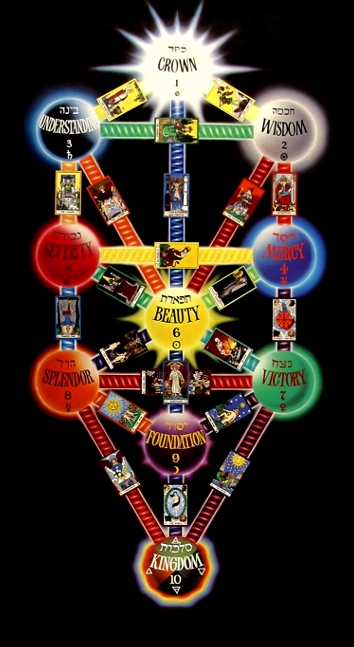 The Hermetic Order of the Golden Dawn

Next Up:  –>  Contemplative Tarot